Late in August, I caught up with artist Judith Schaechter and Chrysler Museum curator of glass, Carrie Needell, by phone in advance of Schaechter’s exhibition opening in late September.

When, fairly early on, Staechter said, “I’m familiar with this line of questioning,” I thought, “Oh, great, here we go.”  And I’m sure she did too.  But not too much farther into our conversation, she said, “It is very refreshing talking to you.”  And I felt the same.

But let’s back up.  Schaechter, a painting major turned sculpture major—whose BFA was retroactively changed to glass—recalls that she is not sure what it was about glass, but encountering it while an undergrad at RISD “changed my life forever and ever…it was very mysterious; just an inkling.”

As a painting major, she was daunted by the tradition’s long, deep, and pluralistic history and felt she had nothing to add.  “I was intimidated.”  Not so with glass.  She felt free to “mess around” and, as a result, “fell in love with it.”

Though she works somewhat traditionally—the work looks like stained glass—her content is contemporary and not religious.  But it is not political either.  “I don’t like political art, though I am a political person.  It quickly becomes propaganda.”

So what exactly is her content?  She makes work about “feelings, negative feelings.”  When visual art works, so her thinking goes, “it works on a one-to-one intimate relationship; it doesn’t move groups of people.”  When viewers initially asked why she populates her work with all of these “depressed, negative people,” she found it surprising.

“People don’t need help feeling badly,” but everyone “has feelings that are hard to deal with.”  She goes on to describe feeling somewhat depressed as a child and her mother’s commandment to “cheer up.”  That didn’t help, but “music, paintings, books, and poetry that were poignant helped me.”   And this is where we started to go in deep because I shared that, when my husband passed away four years ago, it wasn’t self-help books that sustained me, but books full of poignant power, like Joan Didion’s “A Year of Magical Thinking,” and Elizabeth Alexander’s, “The Light of the World.” 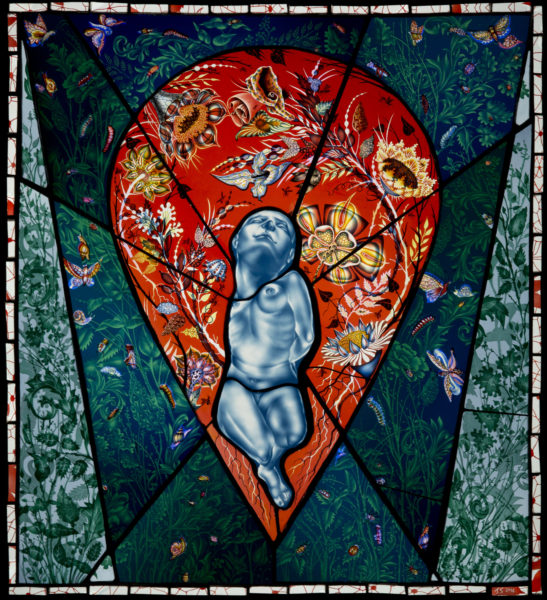 So, Staechter depicts characters, as she calls them, “in transitional moments.”   Her stained glass work is lush and beautiful, but she thinks critic and philosopher, Author Danto, misses the real point about beauty. For her, “beauty is interesting because it helps us feel our feelings more deeply.”

When asked if she does a lot of planning for each poignant piece, her response was oblique, yet right on: “Both and neither and both.”   She does “a lot of preparatory things.”  She draws by hand, scans the drawings into a computer, and manipulates them much like a collage.  But, she reflects, “My goal as I get older is to be more spontaneous.  I am good at controlling things.”

Despite intriguing content, she asserts that “I don’t believe there’re any new narratives out there.”  So she seeks not to be a content innovator, but “a technical innovator.”  She explains her “yes and no” answer in response to whether her process is traditional by saying that she has invented certain ways of working involving electric tools and hand tools, like files.  She manipulates the glass by engraving through the color.  In her early work, her characters had a self-described cartoony look.  Over time, she has invented ways to create “smooth, tonal transitions in the faces.”

Counter to artists, say Jeff Koons, whose work sees the light of day through the efforts of a team of assistants, Staechter places a high premium on “feedback through the process;” that is, “reacting to the material in real time” so that ideas have the chance to “evolve through interaction with the materials.”

In what appears to be typical—and appealing—self-deprecating-and-not fashion, Staechter states that, “It’s not rocket science.”  Yet, the medium is the message.  And the specific, unique way in which she manipulates the medium and composes her imagery very much informs her content so that her narratives do become new.  True, everything it means to be human has not changed.  But the way in which love, hate, fear, doubt and all the rest of it is expressed changes how we understand it and the insights to be gained.

But don’t take my word for it.  Go hear the artist herself on Saturday, November 23, at 2 p.m.  This gallery talk is free and open to the public, as are those with Needell at the same time on Sundays, September 22 and December 8.  Learn more about why she chose to show Staechter’s work and why she hopes to acquire a piece for the permanent collection.  Not only is the aratist a “big name” in the field, but Needell hopes to remind us that “glass can be so many things” using the Chrysler’s renowned glass collection, especially the Tiffany stained glass, as a context.