While Ohio Players released their debut single, “Neighbors,” in 1967, it wasn’t until 1973 and “Funky Worm” that the Dayton, Ohio band experienced Billboard success on the R&B and top pop albums and singles charts.

Ohio Players were chart-toppers with both “Fire” and “Love Rollercoaster” going to Number 1 on the US singles chart.

Above all the glitz and glamour, Ohio Players were fantastic musicians who could put on a show.  Search Ohio Players “Fire” performance on the Midnight Special TV program from 1975 and you can see for yourself.

In advance of Ohio Players August 25 appearance in Virginia Beach as the headliner of the Funk Fest, I called drummer James “Diamond” Williams to learn more about the group’s concept in the 1970s and beyond. Here’s an excerpt from our conversation.

You joined the Ohio Players as a percussionist right as the band was catching on fire. How did you become a member?

In 1972, Marvin Pierce asked me if I wanted to sit-in with the group. Of course, I said yes. They told Greg Webster (drummer) that he had been retired and that there was a new drummer in town. That was me.

That was right at the time “Funky Worm” was out.

The first album I recorded with the band was “Ecstasy,” which is on Westbound Records. This was prior to the (Mercury Records) albums.

Well, Sugarfoot was a genius in a number of ways — music-wise, instrumentally, and as a lyricist.  He had a pretty good grasp of the English language to be able to rhyme certain words and phrases.

Billy Beck, Sugarfoot and myself primarily did all the writing and production for the band. It was a great time.

Back in the 1970s, bands wrote, recorded and released a lot of records in a short time. What was it like with Ohio Players when you were releasing hit songs like “Fire” and “Love Rollercoaster” within that magical four or five year span?

It was just an incredible period of time within the music industry. There were so many dag-gone hits that were going down at that time. So many artists all over the spectrum.

We just tried to stay up with the game and compete just as much as anyone else that were writing songs and records.

At that time, Jeff, the juices were flowing. We were a band that wrote and produced a lot of our hits as they were being played, which means we went into the studio and jammed on some songs and grooves, and turned them into records.

We were pretty much on it as musicians. Creativity was at its height at that time.

Was there pressure from Mercury Records to produce multiple records each year?

They were pretty much hands-off. The one thing Ohio Players was noted for at that time and still today was that we did everything ourselves. We wrote; we produced; and we mastered all the hits. We had no pressure from Mercury; they just let us do our thing. 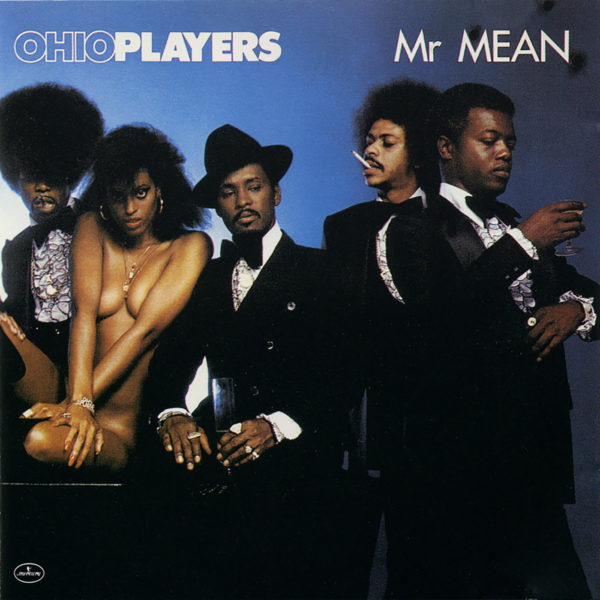 (Ohio Players were known for their use of Playboy models on album covers such as this.)

I remember going into a record store and seeing Ohio Players albums. They were certainly eye-catching. What was behind those sexy album covers?

Well, you know, they were very sexy and they were very eye-catching. That’s what we felt probably worked best. We knew we were musicians but other than that we were grubby guys and probably not the most attractive band.

We thought if we put an attractive woman on the album cover that would draw attention. And maybe after drawing the attention, they’d take the album home and play it.

It was just a concept where we were on the edge. We got with some Playboy photographers and models in Chicago. The band would come up with these different ideas, and we went with it.

Of course, you know, there were pros and cons on both sides, but the album cover “Honey” won a Grammy for its album cover design and concept. So we’re very proud of that.

Were there other bands of that era you were good friends with, whether Parliament, Sly & the Family Stone or Rick James?

Oh man, are you kidding? We hung out with Stevie Wonder; we hung out with Kool and the Gang, The Commodores, as you mentioned George Clinton and the Parliament Funkadelics. All those guys were friends of ours from way back. Rick James was a personal friend of mine.

There were a lot of family-like feelings from one band to another band. We worked together a lot, so we got to know one another. We still have friendships from back in the ‘70s.

As a classic funk band from the 1970s, what did the members of Ohio Players think of the disco sound and its popularity?

Well, we tried to stay current with what was going on in the industry to a point.

Disco did come in and we tried a few disco-type moves and ideas.

Actually, as a drummer I hate disco because it’s a straight beat, Jeff, and it doesn’t need any variation. It’s a straight four on the bass drum. It’s not complicated, not syncopated and pretty boring for a drummer. We really didn’t like it but we tried a few songs because of the fact that everybody was going that direction.

One of the things I always loved about ‘70s era funk band and glam rock bands like David Bowie and Slade were the over-the-top outfits and wild hair. It was like a performer’s uniform. Earth, Wind & Fire certainly had the look too. How important was the image of the band to the Ohio Players?

When you think about The Temptations and those doo-wopers that came in a little bit ahead of us as far as bands are concerned, they always wore the dapper uniforms and all that stuff.

We just tried to stay within the game of being an entertainment group and one that could not only entertain musically but the way we looked when we came on stage.  It was more or less a lifestyle and try to make people who come to the shows think you’re not just wearing street clothes, but you’re wearing something that really looks like a show.

In 2017, you and the current members of Ohio Players released a new single called “Reset” that has that signature Ohio Players 1970s funk vibe. Was there consideration to recording a full-length album as well?

We wanted to stay within the concept of the sound the Ohio Players always had. We wanted to stay true to that. We are completing that album right now. It’ll be called “Reset.” We’re working on the rest of the songs. We look for it to be out next spring.

Cherry Red Records, in the UK, has released the “Definitive Collection of the Ohio Players.” How do you want today’s music fans to hear in your music and what you’ve accomplished in your career?

I would like for them to look back and listen to the music and realize the Ohio Players were not just a funk band, but a band that created a lot of good music. We pride ourselves in that. Songs like “Contradiction” and “Good Luck Charm” — songs we generally don’t play in the show — are absolutely wonderful musical concepts.

We took pride in that as musicians to try to create just good music. Music with verses, hooks, and other variations. All the stuff that make music actually breathe.

We want people to think of us as good musicians. That’s what it’s all about.

Presented by Live on the Atlantic

24th Street on the Oceanfront